4.8/5
Excellent
Based on 6 reviews
from
£42.00
Home / Krakow / Auschwitz-Birkenau tour from Krakow with hotel pickup
Free cancellation

The grim Auschwitz Birkenau will forever be remembered as a place of death for millions of innocent people, including women, children, and men. A visit to this place will help you understand the enormity of human tragedy during the Second World War.

The Nazi camp was established in 1941 when the first prisoners were placed there. During the 4 years of its activity, the camp was significantly expanded to include the gas chambers and the labor camp. Prisoners living in real hell on earth were deprived of their human rights and dignity, suffered violence, and underwent dangerous medical experiments.

You will start your tour to this gloomy memorial by pickup from your hotel in Krakow by a comfortable minivan. You will be taken to Auschwitz and take part in a tour with a professional English-speaking guide. The tour includes visits to the two camps Auschwitz I and Auschwitz II Birkenau. You will see the remains of barracks, watchtowers, railway ramps, gas chambers, and crematoriums.

The guided tour takes 3 hours and 30 minutes and you will given an extra 30 minutes in the Birkenau (Auschwitz II) part of the museum to contemplate, have a break, go to the museum's shop or just go on your own to the places you wish to see extra.

Meeting point:
Pickup from your accommodation in Krakow.
What to remember
Read more
Provider
Gr8way
Booking fee
Good news! No extra fees are applied to this booking.
Cancellation policy
Receive a 100% refund if you cancel up to 24 hours before the experience begins. 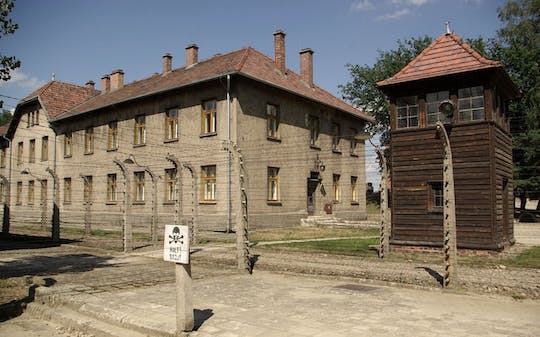 Based on 6 reviews from verified customers