Wieliczka Salt Mine ticket and guided tour from Krakow

5/5
Excellent
Based on 1 reviews
from
£53.00
Home / Krakow / Wieliczka Salt Mine ticket and guided tour from Krakow
Free cancellation

Wieliczka Salt Mine was opened in the 13th century as one of the world's oldest salt mines. It reaches almost 327 meters below the ground and has over 287 kilometers. During this guided tour, you will walk through 20 chambers taking the incredible journey for over 2 hours. Admire magnificent constructions and enjoy the positive effect of the microclimate.

While walking along 3 kilometers of corridors you will have an opportunity to see with your own eyes the heritage left by generations of miners. See the Chapel of St. Kinga, the only underground church in Europe. It is dedicated to Princess Kinga who is believed to have brought the salt treasure to Polish land. Later, you will be taken to see an underground lake which measures 9 meters in depth at its lowest point. This saline lake located 104 meters below the surface is surprisingly a wonderful spot for sailing.

Another chamber in Wieliczka Salt Mine is the Stanislaw Staszic Chamber. It measures 6 m in height and it is the largest excavation on the route accessible to tourists. Did you know that the chamber is featured in the Guinness Book of World Records as the place to hold the first underground balloon flight? A fun fact is that the volume of soil excavated from the mine during its history is enough to build 3 pyramids similar in size to the Pyramid of Cheops.

Meeting point:
Please meet your guide at the bus park at 7 Powisle Street, across from the Sheraton Grand Hotel Krakow.
What to remember
Read more
Provider
All Poland Sp. z o.o.
Booking fee
Good news! No extra fees are applied to this booking.
Cancellation policy
Receive a 100% refund if you cancel up to 24 hours before the experience begins. 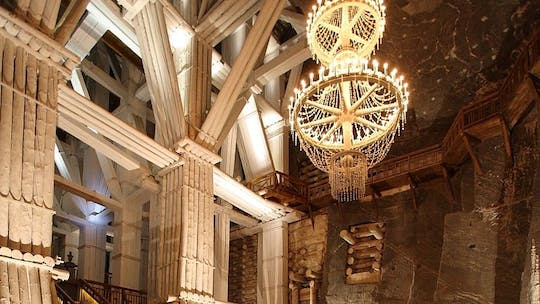