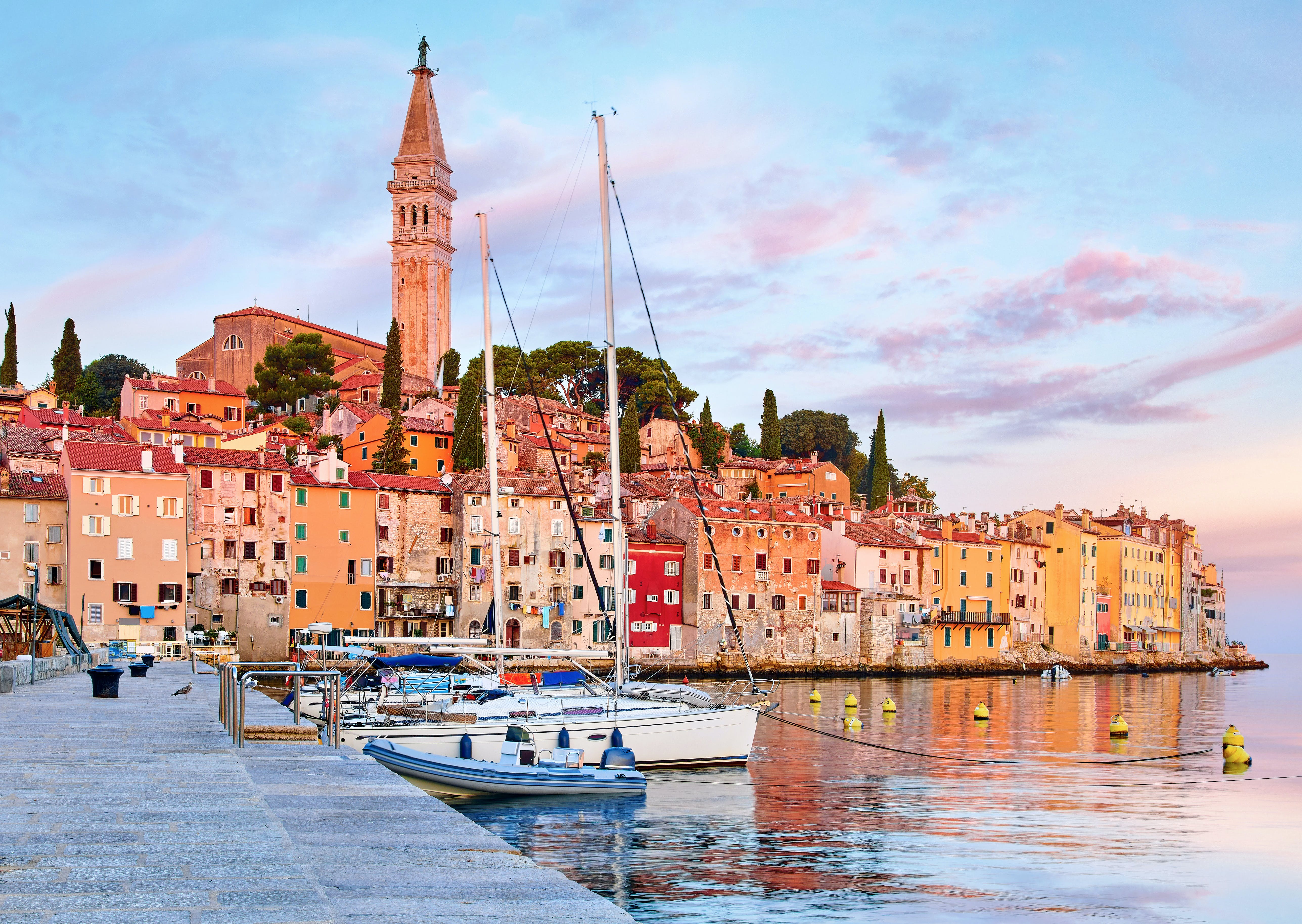 Things to do in Istria Croatia boasts some of the most beautiful parklands in Europe. Take a full day to explore the amazing Plitvice Lakes National Park, an unspoilt nature sanctuary with cascading waterfalls and a myriad of lakes that are accessible via kilometres of wooden walkways. Istria is a melting pot of cultures where historic towns and delicious dishes vie for your attention. This full-day tour takes in some of its star turns, including Bale, Rovinj & Porec. You'll also tuck in to a lunch of tasty local specialities in Grzini.Your adventure kicks off in Bale, a hilltop village of narrow cobbled alleys lined with medieval stone houses and Venetian palaces and churches. Find your inner compass in its mazy old town before heading to Rovinj on the Adriatic. Occupying an egg-shaped peninsula, it's a treasure trove of winding streets that lead to the baroque Church of St Euphemia, whose Venetian belfry dominates the skyline.Then it's on to the hamlet of Grzini to feast on a typical Istrian lunch. From here, it's back to the coast to Porec. This ancient town on a headland is now as famed for its modern bars and clubs as its Euphrasian Basilica, a UNESCO World Heritage Site. Istria is a melting pot of cultures where historic towns and delicious dishes vie for your attention. This full-day tour takes in some of its star turns, including Rovinj, Grzini and Pula. You'll also tuck in to a lunch of tasty local specialities. 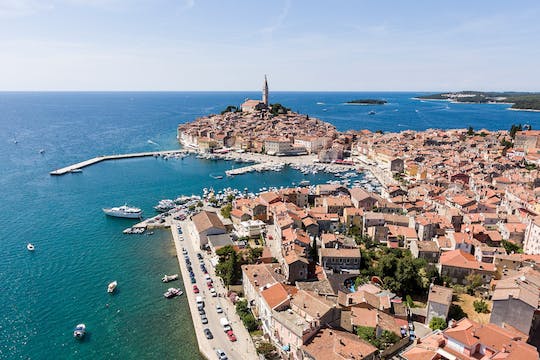 Blue seas, green scenery, rugged cliffs and craggy coastline, Croatia's Istria boasts an enchanting landscape to admire on this boat trip. You'll cruise through the magical Lim Fjord to swim in Vrsar, anchor up in Rovinj to take a look around this pretty seaside village and spend the day sunning yourself on deck. It's idyllic to a T. Slovenia is easily accessible from Istria. And this tour explores one of its most picture-postcard areas – Lake Bled, with its emerald-coloured waters and turreted castle framed against the backdrop of the Julian Alps. As a crossroads between Latin and Slavic Europe, Istria offers up the best of both worlds. It packs a lot into its small size, so this tour gives you the best bits – rustic villages, Roman ruins, Byzantine basilicas and a taste of its world-class food scene. You'll visit Pula, Gržini and Poreč, enjoying scenic landscapes along the way.We kick off in Pula, in the south of the peninsula. It's home to a well-preserved Roman amphitheatre, where you'll get shown around by centurions. But that's just the tip of the iceberg – the town boasts a wealth of ancient relics. Must-sees include the Temple of Augustus and the triumphal arch, while there are also Byzantine and baroque churches as well as a Habsburg fortress.Next, we'll head inland to the hamlet of Gržini for a traditional Istrian lunch, washed down with local wine. It's a showstopper. Rounding off the day is Poreč, which is set on a compact headland. Stroll along the cobbled Decumanus, which dates from Roman times, to the sixth century Euphrasian Basilica, a UNESCO World Heritage Site.

Things to do in Istria

Heart-shaped Istria is the sort of destination where lifelong romances begin. You’ll fall in love with its culture and its heritage, its coastline and its villages, its gastronomy and its wines. In other words, you’ll fall in love with Istria. This peninsula is so in demand, that Croatia and Slovenia share it. Even Italy has a small toehold. As well as being a melting pot of Latin, Slavic and Germanic cultures, it’s packed with world-class attractions and monuments. Top things to do in Istria include tours to the coastal towns of Pula – its Roman arena is spectacular – Medulin, Porec and Koper. Plus, there are boat trips in Kvarner Bay and excursions to picture-perfect Lake Bled. And if you want a bit of fun family frolicking, you’ve got the thrills and spills of a day at the waterpark. The Six Best Things to in Istria 1. Uncover Istria’s Roman heritage Pula has been a magnet for holidaymakers since ancient times. The Romans loved it so much that their presence can still be felt as you walk around, whether it’s the amazing seafront arena or the well-preserved Temple of Augustus. You can visit the arena, which is still used for concerts, and take lots of selfies. Later residents left behind gems such as the 13th-century Communal Palace, the three hilltop forts that ring the old town and the elegant Habsburg palaces along the Riva, which exude oodles of old-world charm. 2. Savour the flavours of Istria Istrian cuisine is renowned all over Croatia and Slovenia for the richness and variety of its flavours. The star ingredient is the not-so-humble truffle, which is one of the world’s most expensive foods. Locals brook no imitations and restaurants proudly display brass plaques saying ‘tartufo vero’, or ‘genuine truffle’. Other popular delicacies include mussels, oysters, cured pršut ham and the omelette-like fritaja, usually made with seasonal greens such as asparagus. For dessert, make sure to try rum-and-raisin-filled doughballs known as fritule. And why not head to heart of the peninsula to taste these Istrian specialities in style. The hilltop hamlet of Motovun, still protected by its medieval Venetian walls, is a local mecca for dishes layered with wafer-thin truffle slices – washed down wines from the vineyards below, naturally. 3. Enjoy a cruise in Kvarner Bay The western coast of Istria is dotted with beautiful, must-visit towns such as Koper, Poreč and Pula. In contrast, the eastern coast is far less developed. Wrapped around Kvarner Bay, it’s famed for the karst islands that are scattered across it like gemstones. Cres and Krk are the two largest and can be visited on boat trips. Another option is a coastal cruise that takes in hamlets such as Mošćenice or the former Habsburg riviera resort of Opatija. While Medulin on the very southern tip of the peninsula is a hub for dolphin-watching and sunset cruises. And for alternative watery fun, Aquapark Istralandia is ideal for a family day out. 4. Visit Lake Bled in Slovenia If you want to get the ultimate Istrian holiday selfie, head to Lake Bled in Slovenia. Wait till you set eyes of it – an alpine beauty that’s launched a thousand postcards. The lake is nestled in a valley surrounded by the often-snowcapped peaks of the Julian Alps. The icing on the cake is the tiny tree-studded islet crowned by a copper-topped belltower in the middle of the lake. You can get a boat out to it and visit the baroque church, which is reached after climbing up 99 steeped-in-legend steps. And there’s more. Adding to the scenery is clifftop Bled Castle, which lords it over the lake. The waterfront is lined with cafés and restaurants, most offering typical cream pastries from the valley – the recipe is officially protected by the Slovenian government. A guided tour from Istria ensures you get to visit all the lake’s attractions. 5. Explore the caves of Istria The town of Pazin in central Istria boasts one of Europe’s most unusual cave systems. And you can explore it from top to bottom, either by zipline or an underground tour. Just under Pazin Castle is a 100-metre-deep abyss known as the Pazin chasm, which you can cross by zipline. The canyon is the entry point into the caves, which house three lakes. It’s a subterranean underworld so impressive that locals say it inspired writers as far apart as Dante Alligheri and Jules Verne. The castle, precariously perched on a clifftop, has stood guard over the gorge for more than a thousand years and is really worth a visit. And if you can’t get enough of caves, the Baredine Cave near Poreč is another must. Sophisticated use of lighting makes any visit an illuminating experience. 6. Experience the Venetian vibe of Poreč Picture-postcard Poreč has a Venetian vibe that reels you in the moment you arrive. Its stone streets and alleys crisscross a tiny peninsula that has in its heart a Byzantine basilica that’s a UNESCO World Heritage Site. The Euphrasian Basilica, as it is known, was built over a Roman villa whose mosaic floor can still be seen in the oratory. In summer months, there are regular boat trips to the islet of Sveti Nikola, some 500 metres from the peninsula. It’s very developed, with hotels, resorts and even a mini-golf. But the star is without doubt the Istrian Fantasy Forest, which is like something from a Grimm Brothers’ fairytale.
Read more